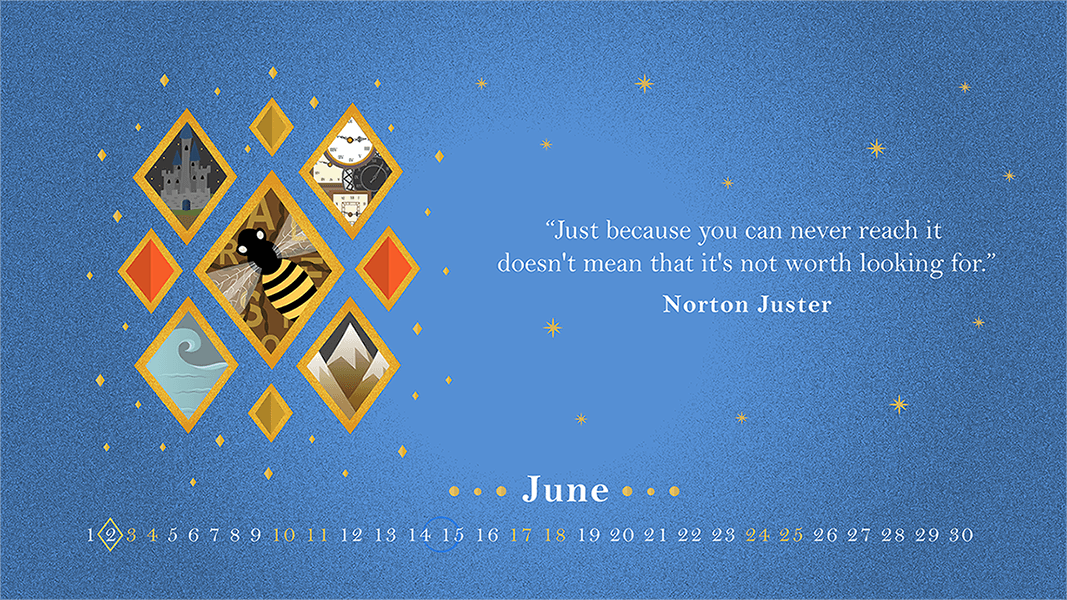 I can officially announce that winter is over and summer is here! Time for those fun days in the sun and an inspirational desktop wallpaper for June, which will brighten up your day! For those of you who have your birthdays in June, you’ll be delighted to know that you might be sharing your birthday with some amazing figures. For example the 4th June is the birthday of Aesop, the legendary story teller known for his fables and the 30th June is Superman’s birthday. Another fun fact, it is also Donald Duck’s birthday on June the 6th! In the literacy world, June the 2nd is the birthday of an amazing children’s book writer born in 1929. I wonder, if you can name this writer without looking at the image above? Here are some more clues to help you out!

This author started writing while he was in the navy. His first book, The Phantom Tollbooth was published in 1961. His neighbour, Jules Feiffer, helped illustrate the book. Other books he has written include The Dot and the Line: A romance in lower mathematics, which was animated into a short film that won the 1965 Academy Award. To this day, he continues to write stories. Recently he teamed up again with Jules Feiffer on a new book called The Odious Ogre. Guessed it or not, here comes the answer. It’s Norton Juster! This month’s desktop wallpaper for June was inspired by my favourite book by Norton Juster, The Phantom Tollbooth. Phantom Tollbooth tells the story of a bored little boy named Milo who discoveries a mysterious tollbooth in his rooms. This leads him on great adventure, teaching him the importance of learning and having an appreciation for the things in his everyday life. This reminds me have when I was a child and was bored all the time!

The phantom tollbooth is a book that is filled with so many inspirational words and lessons about life, that it was hard to pick one. But I decided to go with one that is most relevant to me:

“Just because you can never reach it, doesn’t mean that it’s not worth looking for.”

I am sure a lot of people of guilty of negative thinking. It is almost second nature for people to think that if something is impossible then don’t bother with it. All that effort and hard work, what’s the point, right? But the point is the journey you take as you try to reach the impossible. You might want to be an amazing author just like Norton Juster. As you work towards this goal, you could be some amazing people and learn some valuable skills. So even if your book never gets published or isn’t the best in the children’s book market. You still have gained something from the journey. So the lesson for this month is to remember that it is the journey that matters, not the destination! With this in mind, never put anything off that you think is too difficult or hard. Keep at it, until you get there. I am sure it will be worth your time and effort in the end.

See you next month for another desktop wallpaper

What do you think of my desktop wallpaper for June? Is it great or does it lack some inspiration? And can you guess what the next month’s author might be? E.B. White, Beatrix Potter, J.K. Rowling or it could be anyone else!

Thank you for checking out my June desktop wallpaper! Feel free to comment any links to your artwork or interesting stories in the comments below!

This website uses cookies to improve your experience while you navigate through the website. Out of these cookies, the cookies that are categorized as necessary are stored on your browser as they are essential for the working of basic functionalities of the website. We also use third-party cookies that help us analyze and understand how you use this website. These cookies will be stored in your browser only with your consent. You also have the option to opt-out of these cookies. But opting out of some of these cookies may have an effect on your browsing experience. To opt-out or for more information, please visit our cookie policy page.
Necessary Always Enabled

Any cookies that may not be particularly necessary for the website to function and is used specifically to collect user personal data via analytics, ads, other embedded contents are termed as non-necessary cookies. It is mandatory to procure user consent prior to running these cookies on your website.